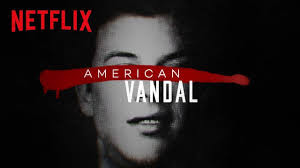 I don’t like binge watching shows.  I also loathe the culture that surrounds it. The adulthood expectations of my boring life influence this opinion heavily, but there’s also the thought of having to drop everything and spend 10-12 hours watching something in a misguided attempt at keeping your finger on the pulse of what Twitter has decided is “in” that makes me want to yell at kids to get off my lawn in random places that just so happen to NOT be my yard.  But there is a show where I have relented, hanging my head as my pride deflates and I feebly gesture to your TV and Roku stick.  Also, I’m sure you have questions as to why I’m sitting in your living room at 2am in the morning, but there are bigger things to discuss here.

When I found out the next blog hop was going to focus on binging, my mind went to one of my favorite shows in the last five years:  Netflix’s American Vandal.  So as someone converted to the binging religion for one show, I guess it’s now my blood oath to convince you to ignore the other 34,000+ hours of streaming on the network per Google and check this show out.

Now, for a wee bit of warning: For those who want to experience American Vandal in the best way, I encourage you, nay I IMPLORE you with every fiber in my being to stop reading this right now.  Yes, I know how blogs work, but this show will have the more of an impact if you watch the trailer for season one first, then the season itself.

American Vandal premiered back in the fall of 2017 with very little build up or fanfare.  Much like most of its original brands, the trailer dropped on the streaming service only a couple of weeks before the premiere.

The trailer danced through a serious, moody melody as it played out a summary of the injustice at hand:  Someone has drawn dicks on every car in the faculty parking lot at Hanover High School in Oceanside, CA.  The accused, the thick headed and habitual prankster Dylan, emphatically pleads his innocence.  Pretty silly stuff, right?  It became very clear that this show was aiming to be a parody of the true crime documentary genre, something that had surged in new heights of popularity thanks to, ironically, Netflix itself.  At least, that’s what I thought at first.

As I found out after watching the first season, it was a smoke screen. About 10 minutes into the first episode, it became clear that despite the juvenile subject matter, the world of the show was grounded in our reality.  Dylan faced serious consequences for this prank, and the documentarians (who were also Dylan’s fellow classmates) were eager to find the truth, even if it all circled back to Dylan.  The show is funny, but the jokes stem from observations more from any type of slapstick gags that are established as everyday norms in that world. With its structure referencing the true crime documentary instead of just ripping on it, the show has more in common with Shaun of the Dead than Airplane!

As a mystery, the show delivers a tremendous and fun experience.  In the ensuing pursuit of the truth, the audience will bear witness to a deep dive analysis into a rumored tryst during a weekend camp getaway including a CSI-esque animated recreation, teachers who are even less mature than the students themselves, and the upmost importance of hairy ball drawings in this tale.     The pacing is brisk but not too quick, and every sharp turn in the story feels organic.  Additionally, each season (with season 2 having just premiered this fall) contains 8 episodes with each episode ranging in length between 30 to 45 minutes.

With all that, the show offered more than enough to engage me.  But as I was led through labyrinth of phallic artistry and high school hijinks, the themes jumped from around the corner and startled me into deeper-than-expected ruminations. For example, as with most shows or movies set primarily in high school, the idea of identity was a prominent through line.  But as the story reaches its conclusion, the focus is less on one’s self discovery of identity and more on the realization that it can become just as much of a curse.  For all those that like to dig through layers and layers of potential meaning in art, this show is a willing sacrifice for you.

So take the dive into something different and discover who drew the dicks.  There’s more waiting for you than you might expect.

Popular posts from this blog

Blog Hop 2019: I tried to defend the Incredible Hulk, and I went insane.

November 25, 2019
For this go-around of the blog hop, I was planning to defend a movie whose reputation needs a little boosting; The Incredible Hulk (2008)  Or so I thought. However, after re-watching without the lens of nostalgia, the movie’s constant low placing on various Marvel lists make sense.  So for this blog hop, I’m going to examine The Incredible Hulk (2008) and look at it as straightforward as possible. To begin, let's look at that * thud* *Wakes up an indeterminate number of hours later, head throbbing* Me:  What the hell happened?  Wh…why am I tied up? *Down the dark corridor, I hear a deep, reverberating smack.  A millisecond later, the bestial groan of “hulk smash” echoes towards me.  A figure cuts through the darkness. Right away, the bright green Teenage Mutant Ninja Turtles hat pulls my eyes up.  Moving down, I’m unable to see the face due to the bill being bent down, casting a shadow over my assailant’s face. . His Green Ranger shirt continue d to green motif
1 comment
Read more

April 19, 2019
Like most writers, I have a day job.   Unlike some, I don’t see it as a totally necessary evil; It’s necessary, but not evil.    In fact, I consider myself luckier than most when it comes to the “writer with a day job” moniker.   It’s not just an 8-5-er that’s complete void of writing.   My aspiration towards writing perfectly lends itself to my day job as a job coach.   As a job coach, it is my responsibility to assist people with bettering their employment options.   My co-workers and I call this ultimate goal “tier to tier movement”.   Though it vaguely sounds like a video game term, this phrase refers to the act of bettering one’s current situation.   In most cases, this means finding a job when one is unemployed.   In some, it means finding a better job than their current one. As with any trade, there’s a multitude of tricks and stratagems that can be employed to help clients achieve their goals: Resume building, interview practice, training plans, job search assistance,
Post a Comment
Read more